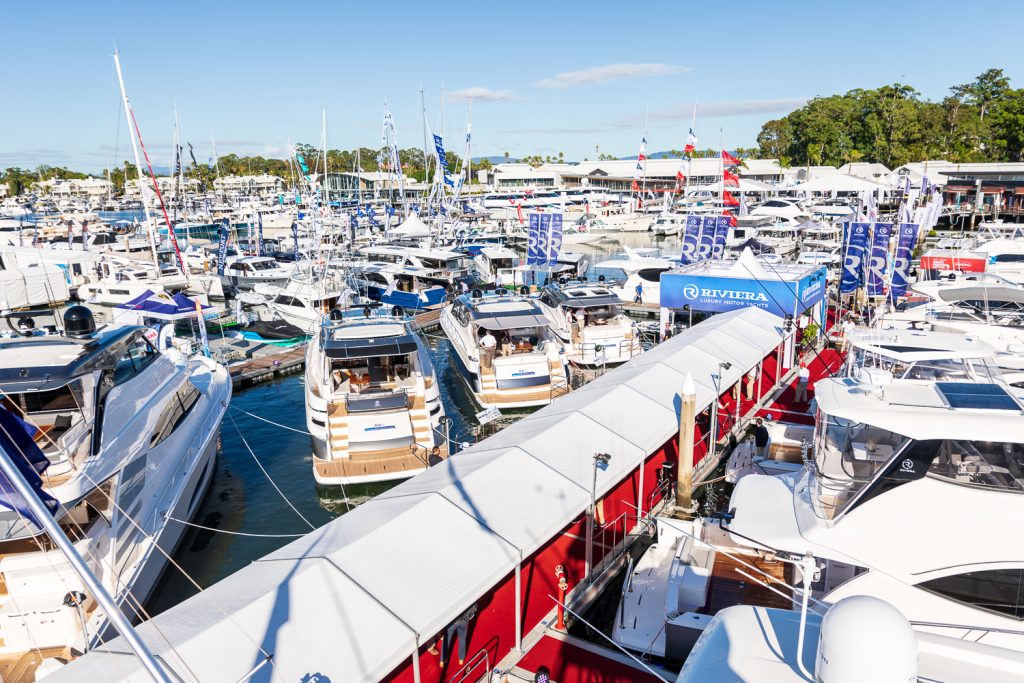 A$8m investment allows berthing of larger yachts up to 55m

The 32nd edition of the Sanctuary Cove International Boat Show (SCIBS 2020), to be held May 21-24, will benefit from an expanded marina and various onshore upgrades which are all gearing up for next year’s event to match the success of SCIBS 2019. SCIBS is one of the two leading boat shows in Australia.

The latter event was declared to be one of the most successful in the event’s history and it attracted 47,243 visitors, 334 exhibitors and over 600 boats. With exhibitor applications opening today, the organisers anticipate that exhibitor space will again sell out well before SCIBS 2020 in May.

An A$8.3m investment programme is currently underway to expand the marina, with an additional 66 berths allowing larger superyachts up to 55m (180ft) to be berthed. This programme is being implemented by Mulpha Australia, the owner of the marina and the adjacent Sanctuary Cove resort. The expansion is due to be completed ahead of SCIBS 2020, allowing more and larger yachts to be included.

In terms of the onshore developments aimed at enhancing the visitor experience, these include an improved pavilion layout and new zones catering for more trailerable boats on land and luxury vessels on water.

SCIBS general manager, Johan Hasser, said: “The expansion of the marina presents the opportunity to grow the high-end offering on water and strengthen the luxury superyacht and charter segments at the show. More premium on-water displays, coupled with more space for the growing trailer boat segment means next year’s show will aim to expand both ends of the market.”

Recently appointed general manager of Quintrex Boats, Sam Heyes, has high hopes for the company’s hometown boat show and their dealer network, including Brisbane Quintrex, Surf Coast, Whitewater and Tweed Coast Marine. “SCIBS is the Gold Coast’s biggest trailer boat event of the year,” Heyes commented. “We are an outdoor recreation company, and the layout of SCIBS is perfect to show off the boating lifestyle. Because we have access to sea trials, customers can test drive at the show. ”

Maritimo lead designer and brand director, Tom Barry-Cotter, said: “SCIBS is one of the most important marketing initiatives on the Maritimo annual calendar. 2020 is set to be one of the most impressive shows yet. Maritimo will have a number of models exhibiting within our on-water brand experience including the launch of a premiere model with details to be announced soon.

“Several international dealer partners will be travelling to the Gold Coast for the show and we anticipate a repeat of previous year’s sales success,” he added.

Andrew Bennett from Queensland Marine Centre (QMC) said he was thrilled to be returning to SCIBS in 2020, stating it is an opportunity not to be missed for marine brands. “SCIBS is always a successful show for our team and next year will be no exception. We’ll be showcasing a range of brands including SeaRay, Boston Whaler, Mastercraft and Dorado,” he stated.

Riviera’s brand and communications director, Stephen Milne, confirmed that the company was looking forward to their 28th appearance at SCIBS and the opportunity to showcase an outstanding collection of motoryachts.

“2020 will be an exceptional year for Riviera as we celebrate our 40th anniversary,” Milne commented. “Around the world, our 5,600 motoryacht owners and our team of over 600 master-craftsmen on the Gold Coast will be triumphant as we celebrate the finest-ever Riviera motoryachts created with two world premieres scheduled at SCIBS 2020.”

He continued: “Being such a prestigious year, Riviera has many plans and surprises in store for 2020 and that includes a sensational display of motoryachts at SCIBS from 11.8m-20m (39ft-72ft) across our Sport Yacht, SUV, Flybridge, Sports Motor Yacht and Belize model collections. As Australia’s largest and most awarded luxury motoryacht builder, SCIBS provides the perfect opportunity to present one of our most comprehensive displays of the year.”