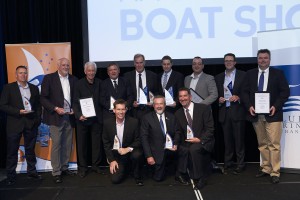 Muir Winches Australia won the prestigious ‘Exporter of the Year’ award. They also took out the award for ‘Best Export Performance – Large Exporter’’.

Muir has been the dominant force in Australian anchoring system technology since 1968, and by industry standards is recognized as one of the leaders and innovators for anchoring systems worldwide for superyachts, pleasure crafts, fast ferries and commercial vessels from 5 to 140 meters in length. Despite the turbulent economic times they were able to maintain their position through innovation, high quality products, a worldwide distributor network that reaches over 40 countries and new marketing initiatives including PR and social media.

Steber International was awarded the ‘Most Innovative Exported Product’ Award for their state of the art SSS Blue Bottle – Unmanned Surface Vessel (USV) which addressed the worldwide demand for small security vessels which can be operated by one person, on-shore and away from any dangers. This vessel can operate 24/7 and uses solar power.

Arctic Steel won the ‘Best Export Performance – Small Exporter’ category. This Queensland based business designs and manufactures a range of cast stainless steel marine engine water strainers. They pride themselves as being the only manufacturer in the world offering a cast stainless steel strainer of unprecedented quality and performance.  From virtually zero exports in 2011 they are now exporting to 16 countries across North America, Europe and Asia/Pacific.

‘The Sanctuary Cove International Boat Show Best Export Marketing Strategy Award went to GME. GME Marine Division manufactures and distributes a board range of marine electronics beacons, entertainment systems, active/passive antennas and accessories. GME marketing strategy is to build a better business and not the usual ‘bigger one’. This established them as the world’s leader in the EPIRBs (Emergency Position Radio Indicating Beacons) niche market. GME has through strong strategic marketing successfully entered such markets as Bangladesh, Lebanon, Morocco and Egypt.

Hanseatic Marine|SilverYachts based in WA, took out the prestigious ‘Superyacht Industry Business of the Year – Manufacturer’ Award. SilverYachts remains the only large Superyacht builder in Australia and successfully exporting overseas. Their 77m M.Y Smeralda delivered in 2012 achieved a number of International Awards in 2013 including Boat International World Superyacht Award Winner and ShowBoats Design Awards.

Rivergate Marina & Shipyard has won the “Superyacht Industry Business of the Year – Service Provider’. This Queensland Marina & Shipyard is recognized as Australia’s and the South Pacific’s leading premier Superyacht refit and project management destination. Rivergate works closely with a number of Australian businesses to ensure they can accommodate the refit and repair requirements of any size of Superyacht wanting to come to Australia.

For further information about the Awards contact AIMEX at admin@aimex.asn.au