Home » AIMEX 2014 BOARD OF DIRECTORS ANNOUNCED

AIMEX 2014 BOARD OF DIRECTORS ANNOUNCED 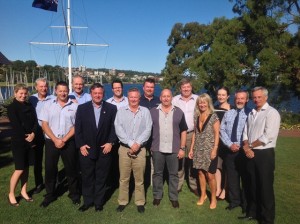 The Australian International Marine Export Group, the peak body for the marine export and superyacht sectors of Australia held their Annual General Meeting at Sydney’s Royal Sydney Yacht Squadron on Friday 6 December where their Board of Directors for the 2014 year were elected.

Murray Owen, Director of Marine Engineering Consultants was also welcomed as a Director on the board. Murray was elected by the Superyacht Australia Committee as their representative on the AIMEX Board. Murray was an integral part of the previous SYBA board and brings with him a wealth of knowledge both in the marine export, commercial and superyacht sectors.

Sean Griffin, GME, who due to his significant international travel, did not stand for re-election as Vice President.  Richard Chapman thanked Sean for his service as Vice President for the past several years. “He has been a stalwart on the AIMEX board bringing to the table huge experience in international sales and marketing.”  Sean was re-elected and will remain on the board as a director.

Richard Chapman commented “It is important for the future of AIMEX & Superyacht Australia that we have a strong, stable and experienced board of directors.  There is a lot to achieve in the coming financial year as AIMEX drives key initiatives designed to profile industry capability and increase export sales.  Many AIMEX and Superyacht Australia members have diversified their businesses over the past 3 years with a lot of focus now also coming on opportunities within the commercial sector. This will be a key focus for AIMEX over the next 12 months with a good contingent exhibiting at Asia Pacific Maritime 2014 and the AIMEX team investigating more commercially targeted trade shows and conferences”

AIMEX continues to be seen as one of the most proactive and dynamic industry peak bodies.  Their strong balance sheet ensures their future and allows them to continue delivering excellent value to their membership base.