Gold Coast based AirBerth Boat Lifts have been announced as a finalist for the upcoming 2015 Maritime Australia Limited National Innovation Awards. These prestigious awards are held during the Pacific 2015 International Maritime Exposition in Sydney.

The Pacific 2015 event brings together all the latest innovations across the maritime industry for leading commercial and Government organisations from through Asia Pacific to see firsthand.

AirBerth Boat Lifts have developed a range of floating boat lifts which enable boat owners to have the convenience and ultimate protection of dry storing their vessel out of the water. Constructed entirely using HDPE (High Density Polyethylene), this robust material is ideal in the marine environment as it is non-corrosive and has the highest UV stability.

The team at AirBerth will be displaying at Pacific 2015 on stand numberACMG-2 as part of the Australian International Marine Export Group (AIMEX) display. 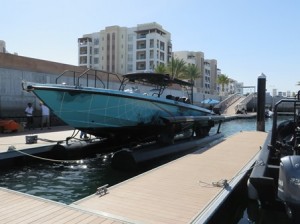