In an interview with The Australian, Mr Liveris, Darwin born to a Greek immigrant family and an engineering graduate from the University of Queensland, said: “I’ve been biting at the bit to get the action plan on this for seven years.”

Committed to working with Mr Trump on one of his most ­ambitious pledges, Mr Liveris said his aspiration was to transform the environment for investment decisions in the US. He said he was “absolutely” confident this was achievable and the ramifications would be global.

“If you get a pro-business environment in the United States and if you lift the growth rate from the twos to the fours that’s going to be an astonishing positive driver for the global economy,” he said.

While Mr Trump plans to unleash a pro-business investment strategy, Australia is locked in bitter political conflict over most items on the president-elect’s agenda — witness the brawl over company tax cuts, energy prices, regulation and the opposition-led anti-­business agenda at the last election. 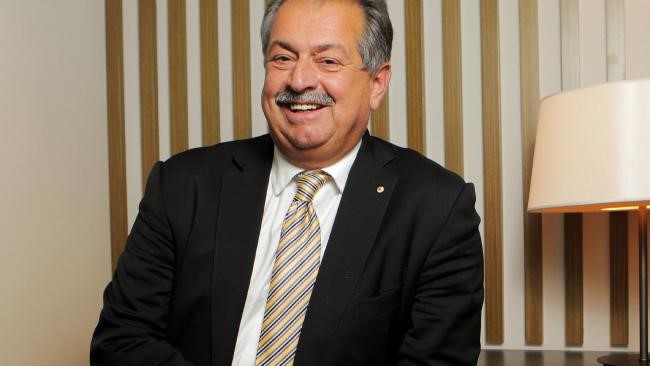 Mr Liveris said he remained an optimist about Australia but said the country “had not yet come to realise something that I believe Donald Trump realises very well” — that free markets do not equate with no government intervention.

“That is not the world we’re playing in anymore and hasn’t been for some time,” he said. “Building integrated industrial sectors based on competitive inputs does need sound policy making in partnership with the private sector.

“But to Australia that sounds like picking winners and losers. It’s not. It’s really looking at what are Australia’s natural advantages and asking how can I build industries that add value to that using my talent and workforce. That’s picking sectors, not winners and losers.”

Mr Liveris said his immediate exposure to Mr Trump and the president-elect’s “whole persona, resume and background” revealed him as an “action-orientated” executive who had made the ­revival of manufacturing “a central issue for him and his team”.

The heart of the Liveris approach is a comprehensive strategy to revive investment based on changes in tax, regulation, energy, infrastructure and innovation leading to “competitiveness in the manufacturing ecosystem”.

“If you put these policies in place that should be enough to create an investment environment,” Mr Liveris said. “Unfortunately, we’ve lived in a slow- growth world because, frankly, the investment side has not been there. Investment, despite cheap interest rates has stayed pretty much on the sidelines unless there was a government stimulus.

“You have to feel good about the environment in which you take investment risks, especially in long cycle industries where the paybacks aren’t there for years. And this environment, frankly, has not existed.”

Mr Liveris said he believed ­access to the new president would be “pretty full-on”. Mr Trump spoke with him directly about 10 days ago when “I was asked to meet him and his team”. The brief is to “bring back jobs to America especially manufacturing/factory jobs”. The immediate task is to ­ensure the advisory Manufacturing Council that Mr Liveris heads is equipped with “the very best representatives of corporate and industrial America”.

As long-time chief executive of the US multinational giant, Dow Chemicals, Mr Liveris has built a reputation for his thinking and proposals to rebuild manufacturing in the US, though his ideas have met with little response in Australia.

Mr Liveris said that in his new position he would remain in contact with policy events in Australia. He said that a few hours earlier Mr Trump had said to him: “You’re very Australian but you’re also very American.”

He replied: “Call me a Pacific Islander if you will Mr President, I’m very much connected to my home country. I’ve always said I would like forever to make myself available to help Australia reinvent itself.”

He called the Trump proposal to cut the US corporate tax rate to 15 per cent as “very critical”. With the US having one of the highest corporate tax rates among developed nations “there is now a lot of appetite in both houses (of congress), as well of course, from the president-elect, to lower the rate”.

He said appointments to the administration — Rick Perry as energy secretary and Exxon Mobil chief executive Rex Tillerson as secretary of state — meant there would be people in high ­places with a deep understanding of the energy sector. “My committee will have a lot to say about this,” Mr Liveris said.

He argued cheap energy was “one of the sine qua non competitive advantages for the American economy”. “Companies in western markets like the US, Australia and the UK are competing against countries because countries have state-owned enterprises that, in essence, are subsidised and incentivised to create jobs. That’s unfair,’’ Mr Liveris said.

The required response is to create a “level playing field” through a series of policies that support an industrialised base to achieve global competitiveness for western companies. He said Dow Chemicals had proved “you can revitalise the original sector, in our case chemicals, and then add value to it”. While people often thought of manufacturing in “discrete” terms — making assembly-line components from cars to smart phones — this was an obsolete approach.