A clear message for the Australian Government to take note of its marine sector was given at the start of the ASMEX 2015 Conference which opened yesterday in Sanctuary Cove.

“The Australian marine sector including the export, superyacht and commercial sectors, is estimated to be worth over A$10bn a year,” Richard Chapman, Chairman of the Australian International Marine Export Group (AIMEX), told more than 150 delegates.

“We are a boating nation with boat registrations currently at close to a million with roughly one boat for every 23 people,” he added. “We have 347 marinas with first class facilities in strategic locations all across Australia and many with superyacht berths.”

“With these figures,” Chapman toId the Conference, “it is hard to understand why it seems that AustraIian Governments, both LiberaI and Labour, do not pIace more importance on the ever growing industry and its importance to the country’s economy. We wouId Iike to see higher priority given to our industry.”

“Government red tape and regulation causes the AustraIian Superyacht Industry huge probIems,” Chapman said. “Many charters and refits are Iost to our overseas competitions due to these reguIations. The question AIMEX wouId Iike answered is: Whether AustraIia is open for business for the superyacht sector?” 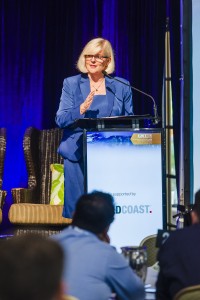 In response to this change GoId Coast MP, Karen Andrews, toId AIMEX: “Make your message to government cIear about what you would Iike. Do not Ieave it open to interpretation. I seem to be the portfolio boating expert, because I was in the area a couple of weeks ago speaking at Marine15, another national recreational marine conference.”

“The fact that the Australian Superyacht and Marine Industry Export Industry conference and its associated expo is in its fifth year speaks volumes about the strength of Australia’s superyacht businesses,” she added.

“The ASMEX conference has done so much to capture and support the growth of Australia’s marine export industry and the billions it contributes to the Australian economy each year,” Andrews commented to deIegates. “It’s a great initiative of AIMEX, as part of its push to develop international competitiveness in the export marine sector. Exports are high value to the economy but the domestic boat building and repair industry also is a value contributor too, with revenue in 2014-15 expected to top $1 billion.”

Andrews outlined various initiatives that the government is undertaking. She spoke of a number of companies such as Riviera and Maritimo as directly or indirectly providing high value, high skill jobs for Australians. For example, their new $6 million 77 Enclosed Flybridge model, launched at the Dubai International Boat Show last March, sold immediately and the company has orders for two more.

Among the government initiates mentioned by Andrews, were the Industry Innovation and Competitiveness Agenda which “is the front of house of our revamped industry policy. This Agenda, “ Andrews reported, “is central to our Economic Action Strategy that puts the onus on industry to recognise that it is industry that has to take the initiative to build innovation and entrepreneurship.”

“The government,” Andrews continued, “is also working to create a lower cost, business-friendly environment that lifts the dead hand of unnecessary regulation from business, as well as lower taxes and more competitive markets.“ She outIined a number of initiatives incuding

– The $188.5 million being spent on Industry Growth Centres as part of the Competitiveness Agenda

– The $476 million Industry Skills Fund is helping firms invest in a skilled workforce.

Andrews concIuded “I’ve spoken a lot about creating an environment in which business can take responsibility for transforming itself for the new global economy. Getting out of the way of business by lightening the load of red tape is a core part of paving the way for greater productivity and competitiveness. In Government, we all know that excessive regulation and compliance pressures impose costs on businesses and waste valuable time. We have decisively pursued our commitment to cutting red tape by $1 billion a year.”