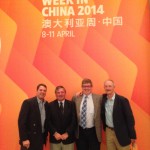 From April 11th – 14th China played host to the 19th annual Shanghai Boat show at the Shanghai World Expo Exhibition & Convention Centre. With over 550 exhibitors, a newly added ‘on the water’ facility and 48,000m2 of exhibitor space, exhibitors and event organisers  deemed the show a success with numbers expected to be well up on those from previous years.

It was observed that there were far less brochure collectors and tyre kickers than before’ with more people appearing serious about what was on offer. With the additional of a leisure section and theme the show aimed to tap into the growing Chinese people’s interest in outdoor leisure.

Australian Week in China, Australia’s largest ever trade mission to China, coincided with the show.  The four day mission, a government initiative to enhance Australia’s trade, investment, education and tourism engagement with China was attended by a delegation of more than 700 representatives from 564 organisations.

President of AIMEX Richard Chapman said “I was impressed by the huge profile Australia week in China received.  It certainly supported our drive into this market and increased visitor traffic to our pavilion. This is an important market for Australian manufacturers and having our Prime Minister host a lunch which attracted key industry stakeholders was a real benefit to our industry.  The contacts made were invaluable and will no doubt bear fruit in the future”

Chapman represented the Australian marine industry on a panel as part of the conference held during the Australia week.  “Interest in the Australia marine sector is high in china, we are renown for our quality, technology and expertise, so for those building boats for export Australian product is high on the agenda” Chapman stated.

Over the course of the programme Australian delegates from the marine sector and a range of other industries were able to participate in a series of events, had the opportunity to meet and network with their Chinese counterparts and hear from Senior Chinese and Australian Government Officials.