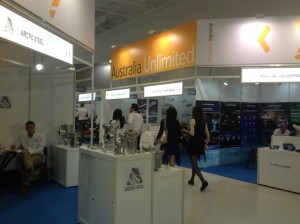 Those wandering the halls of the newly built Kaohsiung exhibition centre were impressed by the large contingent of key Australian companies exhibiting at the show. Australia had the biggest pavilion of all international countries and turned out in force to support this show.

CEO M Edwards who attended the show and organized the Australia pavilion said, “We came to the show not expecting a lot as it is always a suck it and see approach with new shows.  However we were pleasantly surprised by the professional organization of the event, the superb facilities at the new exhibition centre and the significant number of true industry exhibitors making this a show with huge potential.  Visitors came out in droves to visit the show and whilst many were locals wanting to see the new exhibition centre and the amazing line up of locally built boats, a reasonable number of visitors were looking to buy.  It was amazing to see the queue of locals waiting to get a tour of the Horizon boats and I commend John Lu, MD Horizon for this initiative, plus we thank the Kaohsiung government for encouraging us to exhibit.”

On talking to Australian exhibitors Edwards advised most of our major equipment manufacturers were present and all reported a sufficient level of enquiry to warrant returning in 2016.  Matthew Johnston MD Muir Winches commented, “The show exceeded my expectations, I had some good meetings with new and potential customers as well as meeting with our distributors in this region.  The logistics and organization around the show made exhibiting easy and the accommodation so close to the show was a bonus”.

Richard Chapman MD of HyDrive & President of AIMEX said, “I commend the initiative of TAITRA and the Taiwan Yacht Industry association in organizing this show. I was impressed by the number of international and local visitors coming to my stand and secured some strong leads to follow up.  I would certainly recommend to the AIMEX board that they consider attending this show in 2016”.

This sentiment was echoed by all exhibitors in the Australian pavilion with Ronstan appointing a distributor and those companies who had distributors reporting satisfaction with their distributor’s performance at the show and in the market generally.  Ian Clarke Wavedance Kayaks said “It was amazing the interest shown by the local Taiwanese in his kayaks and whilst this is a new sporting, leisure activity for this market it certainly seemed like it would be embraced and offer a good market down the track”.

AIMEX hosted a networking event in their pavilion which was well attended by key stakeholders from around the region.