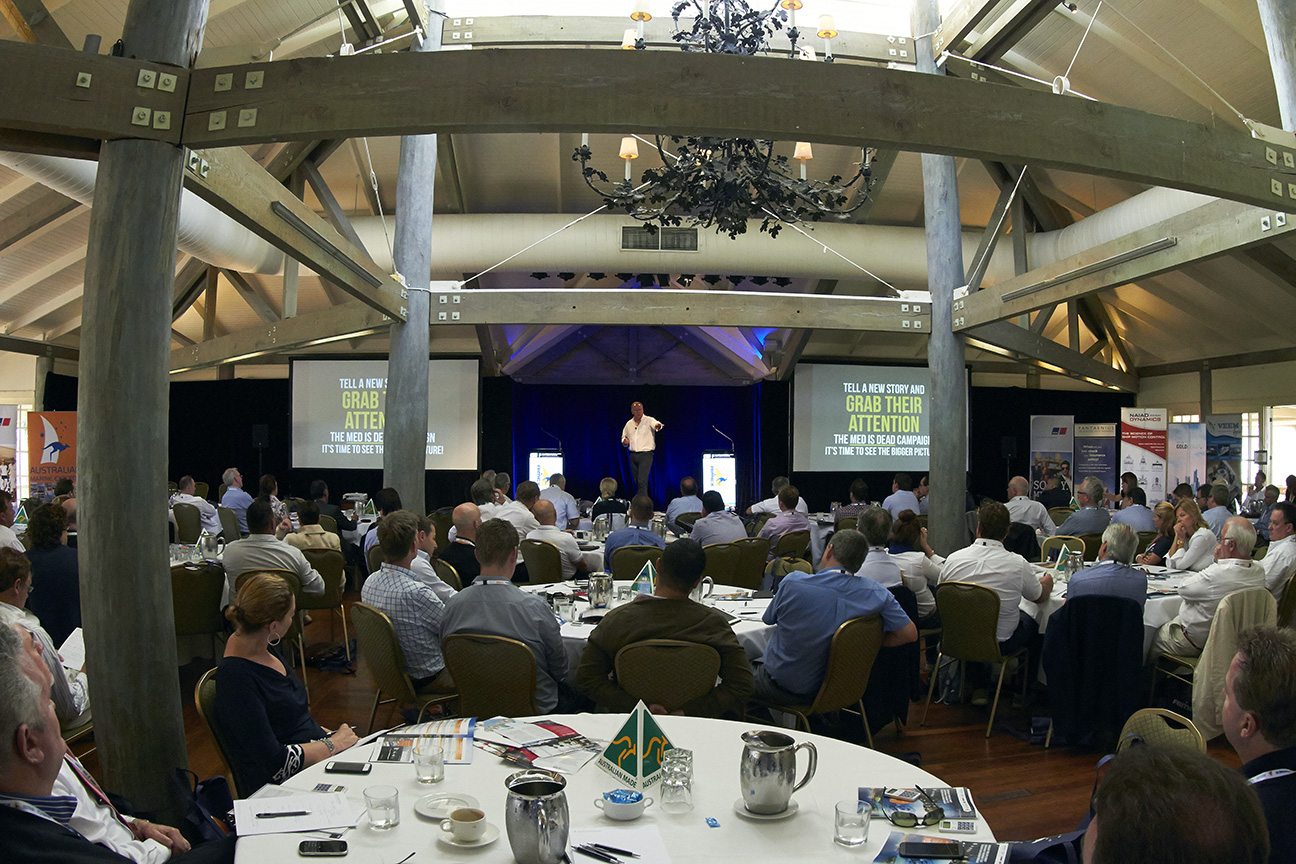 The fourth Australian Superyacht and Marine Export (ASMEX) conference was held last week immediately prior to the Sanctuary Cove International Boat show. The conference opened with a very clear message from Chairman Richard Chapman “Australia is open for business” reiterating the statement made recently by Prime Minister Tony Abbot to over 1000 guests during Australia China week.

In the opening address Richard Chapman, President of AIMEX, set the scene for the conference, reminding attendees that Australia’s marine sector is worth 7.5 billion AUD annually and employs 29,000 people.  “Looking at those figures, it is hard to understand why government does not place more importance on the marine industry,” said Chapman, who went on to suggest the government needed to look at the significant opportunities for growth within the superyacht sector and the very real need to review regulations around chartering to put Australia on a level playing field with South Pacific neighbours.

Also presenting at the conference was the Australian government representative from Austrade and a representative from Tourism Australia who reinforced to the audience the government’s growing recognition of the importance of the marine sector and the role that they would be playing to help grow the economic return from marine tourism and related businesses. It is critical for the ongoing growth of the superyacht sector that the Australian government understands the significant opportunities to drive the superyacht sector and hence drive revenue for the Australian economy.

The Superyacht Group’s Chairman Martin Redmayne was a lively addition to the first morning’s line up.  Martin stressed that in order to increase the number of superyachts visiting Australia, Australia needs to develop a strong proposition and communicate this to the world.  Redmayne highlighted the fact that many superyacht owners are looking away from the Med and Caribbean for new destinations but a strong business case needed to be presented to attract these owners to the South Pacific.  The fact that a significant number of superyacht crew are from Australia and New Zealand must mean there are a number of very positive ambassadors to reinforce the message.

Peter Busfield, CEO of NZ Marine provided an overview of activity in New Zealand and outlined the fact that himself & Superyacht Australia CEO MaryAnne Edwards were hosting a joint meeting between their respective trade and tourism bodies looking at ways to attract more yachts down under. 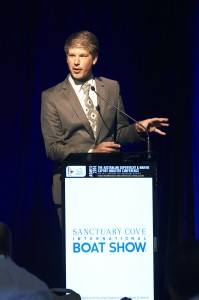 Erwin Bamps, COO of Gulf Craft, attending the conference for the 3rd time talked about how perceptions of locations can both challenge and benefit a brand. “As a superyacht company you have to compete with both your competitors and your customer’s perception of you and your location,” said Bamps. Bamps gave a thought provoking presentation which once again captured the audience.

Positive news for crew and the training sector came from Mark Eldon-Roberts of the Australian Maritime Safety Authority (AMSA) who acknowledged that the current training system does not work for the superyacht industry, with no AMSA-approved STCW course, no recognition for UK MCA STCW qualifications and no career pathways. He proposed a solution be that Australian companies present the case to AMSA with the goal of the Australian STCW being recognised internationally, a dedicated career pathway and recognition of existing yachting certificates by AMSA. M Edwards CEO Superyacht Australia advised she was taking up this proposed solution and would be making a time to meet AMSA in Canberra to progress this issue.

Other topics covered included: an economic overview of Asia; insights into opportunities in the defence sectors; the ability to diversify from the leisure marine sector into the commercial sector; a look at working with the South American market; an insight from Pantaenius on opportunities for Australia; an overview of the Yang Xi Marina Project; and information on support programmes offered to the marine industry by the SME Export Finance and Insurance Corporation.

Day one  closed with a panel session on opportunities for Australia in the all-important Asian market, with a panel made up of Alistair Murray, Ronstan International, Cameron Bray of Bray Management, Hillary Buckman of Ocean Media, Matthew Reaume of MTU and Peter Luke of Superyacht Solutions. Each spoke of their own experiences operating in the region. “Asia’s a very big and complicated place and if you look at it as a whole it’s easy to get lost,” said Luke. A key theme was the need for Australia to help provide a support service for yachts owned and cruised in Asia and that owners from this region are confident in what they want from the market. Bray drove home the size of the existing market of yachts visiting Asia, remarking that one Phuket-based marina had welcomed almost the same number of yachts in 2013 than the whole of Australia. He told the audience that there were ample opportunities to work to convert these boats to come to Australia and that creating a support network in Asia was also key. Speaking from the audience, Farouk Nefzi, Marketing & Brand Director for Feadship, highlighted that “Many people make the mistake of still treating Asia as an upcoming market. It’s not; it’s at the next stage.”

An exciting inclusion into day 2 of the conference was Mehmet Karabeyoglu, Director of Proteksan Turquoise, who gave an overview of Turkey’s position as a yacht building nation. Putting the size of Australia into perspective, Karabeyoglu highlighted that there are more people in Istanbul alone than in the whole of Australia. With Turkey extremely centralised, being a short flight from most hubs in Europe, and with skilled labour abundant, Karbeyoglu made clear why Turkey makes sense as a yacht building location. He welcomed discussion on ways in which Australian companies can partner with Turkish companies, stressing that the opportunities were there. 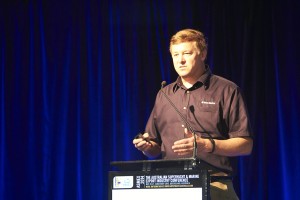 Ron Japinga, EVP Merchandising/Planning/Logistics West Marine USA, gave an overview of West Marine and their position as the USA’s biggest supplier of marine equipment. Stressing that quality products and brands were key, he flagged the issue that “lots of vendors test their product by selling it, rather than by doing the appropriate testing before that, and we don’t do that.” In a message that resonated with the superyacht sector, he said that their mission was to ensure that the hassle was taken out of boating, in order to keep boat owners in the market. Several key Australian companies already within the West Marine family, particularly Ronstan and Aqualuma, both extolled the virtues of the US distributor.

Colin Bansgrove, Executive Officer of the Australian Marina Industries Association, spoke on the marina sector and superyacht capabilities with the results of his recent survey of the marina sector which showed Australia has 116 24m+ berths across 69 marinas. “There are now a significant number of marinas in Australia providing services to superyachts,” he said.

Ian Harrison, Chief Executive of Australian Made, spoke of the need to capitalise on the strong reputation that Australian made products have built. “The kangaroo works,” he said, reminding the audience that this brand is an asset that can help elevate them in the international marketplace.

Following a break, Farouk Nefzi, Marketing and Brand Director for Feadship gave an insightful overview of the superyacht industry. Nefzi spoke of the need to continue to think outside the yachting cocoon and to make sure we are serving owners with honesty and an unsensationalised message: “If you want owners to take us seriously, you have to tell the truth.”

John Lu, CEO of Horizon Yachts gave an overall picture of Taiwan’s position in the superyacht market, including insight on the recent inaugural Taiwan International Boat Show. “Taiwan is a small island, but it has the same population as Australia and there are more than enough people who can afford to buy a yacht,” said Lu.

Steven Vidakovic of Naiad Dynamics then gave detailed insight into the science of stabilisation and its importance in enhancing owners on board experiences.

A panel of the previous night’s Australian marine export and superyacht award winners gave their insight into driving success in the marine sector. A key message from all panel participants, Steven Fisher of Rivergate Marina, Matthew Johnston of MUIR Winches, John Hogan of Superior Jetties and Sean Griffin of GME was “Always listen to your customers, look outside the square, one size does not fit all and be prepared to innovate & diversify”.

Closing the conference was a much anticipated presentation on the Americas Cup from Iain Murray, CEO of Team Australia. Reflecting on the 34th Cup, and looking to the future, Murray spoke of his pride that Australia was fronting a team to challenge for the 35th Cup. “It is time the Australian talent that surrounds the Americas Cup stayed onshore and takes the Australian case forward to the world.”

With that, the 2014 ASMEX conference concluded, ahead of the Sanctuary Cove International Boat Show which by all accounts of sales made and orders received showed the Australian industry is back on track.