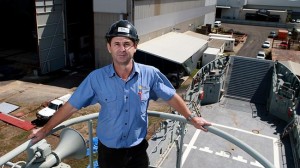 EYE ON THE PRIZE BSE Maritime Solutions has joined Norship Marine and other firms to tender for a contract involving the construction of 21 patrol boats worth $594 million plus providing support, maintenance and personnel over 30 years, worth another $1.38 billion. Brian Keller of BSE Slipways is pictured with a navy landing craft. PICTURE JUSTIN BRIERTY

A CAIRNS consortium bidding for the $2 billion Australian patrol boat replacement program is confident it is a frontrunner for the contract which will employ hundreds of workers over eight years.

BSE Maritime Solutions has joined Norship Marine and other firms to tender for the contract, involving the construction of 21 patrol boats worth $594 million plus providing support, maintenance and personnel over 30 years, worth another $1.38 billion.

Tenders opened in March and close on June 17 with the preferred supplier announced in March next year.

Cairns faces competition from New South Wales, Victoria and South Australia. Cairns is understood to be the only Queensland bidder.

BSE owner Justin Parer said it was time to bring the construction and maintenance of small war vessels “back to Cairns”.

“This is a great opportunity. We have a red hot chance,” he said. Cairns had the expertise, the facilities and the experience to deliver the project, Mr Parer said.

“Cairns has a rich naval shipbuilding heritage, including building of the 14 Fremantle Class patrol boats in our refit sheds in 1988, and we intend to further enhance this reputation for maritime excellence in North Queensland.”

BSE now owns the former NQEA yards where the Fremantle boats were built. BSE had the ship repair knowledge and skills while Norship are respected ship builders.

“BSE was delighted to be invited to the launch of the DAMEN vessel and we saw some innovative designs which we are hoping to learn from and incorporate in future work,” Mr Parer said.

“The visit was another step towards improving the position of Cairns as the hub for Minor War Vessels and a strengthening of ties between BSE and DAMEN – a company with a reputation for delivering on time and on budget.”

He said the contract would provide the city with another “pillar” to the economy, without reliance on tourism, and to avoid its boom and bust nature.

“There is also the multiplier effect – for every $1 we spend, $5.20 flows across the community: shops, coffee shops, hotels, fuel suppliers, tourism operators and housing,” Mr Parer said.

He said jobs and investment would start as soon as preferred supplier status was announced in March with staff recruiting, infrastructure planning and tooling up for jigs.”

He said BSE Maritime Solution’s commitment to help establish Cairns as a hub for shipbuilding, maintenance and repair was perfectly aligned to the Federal Government’s pledge to develop Northern Australia.

Mr Parer called on the community, especially businesses, as well as political leaders, to throw their support behind the tender to send a clear message to Canberra.

Advance Cairns chief executive Mark Matthews said if the contract was successful it would be “an enormous opportunity for Cairns”.

“With prior experience in patrol boat development and maintenance, Cairns delivers success on time, on budget and with the highest quality outcome,” he said.

“Our proximity to the Pacific is a key advantage, and with a well-established workforce, a high level of skills and expertise, and a depth of experience with comprehensive talent, Cairns can deliver.”

Chamber of Commerce and Industry Queensland president Brett Moller said the project would “reignite the Port of Cairns and the region’s marine industry”.

“Cairns has a strong maritime industry making a major contribution to our region’s economy ,” he said.