Club Marine On Board For SCIBS 2014 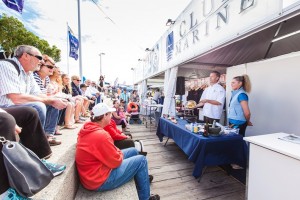 THE Sanctuary Cove International Boat Show (SCIBS) is charting its course for 2014 with planning well under way for the event’s 26th year. SCIBS sales, sponsorship and events manager Johan Hasser said major sponsor Club Marine was back on board for the 2014 show set down for May 22 – 25. It will be the eighth consecutive year Australia’s largest boat and pleasure craft insurer has signed on in support of SCIBS.

Club Marine CEO Simon McLean said he was pleased to support one of Australia’s premier boat shows. “Club Marine has had a long and proud involvement with the Sanctuary Cove International Boat Show,” he said. “We are pleased to continue our participation as major sponsor, in line with our on-going commitment to support the Australian marine industry.”

Mr Hasser said the SCIBS team was preparing a range of new and exciting initiatives and improvements for exhibitors, sponsors and visitors. “Having just celebrated our 25th year we are now creating a fresh new-look show for the next 25 years,” he said. “We learn a lot from each show and it helps us to ensure the event keeps abreast of trends and expectations.”

Mr Hasser said the changes would include a new brand campaign involving the launch of a fresh and engaging new website with user-friendly information. A bigger entertainment schedule and the return of the VIP lounge which made its debut at last year’s Show is also planned. He said there would be significant changes in some areas of the exhibition site within Sanctuary Cove’s Marine Village precinct.

“The main entry point will move while there will be new floor plans for the pavilions,” he said. “We are creating a new open space in our Docks area and there will be some alterations to the lower boardwalk on Marina.” Mr Hasser reminded exhibitors that bookings for SCIBS 2014 open on Wednesday, October 23 at 9am.