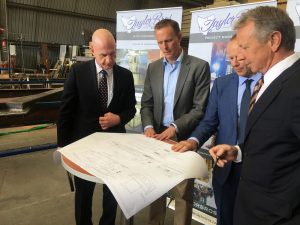 Damen Schelde Naval Shipbuilding (DSNS) has selected Taylor Bros of Tasmania to supply two high powered Antarctic landing barges for Australia’s new icebreaker, the RSV Nuyina. Damen is building the vessel at its yard, Damen Shipyards Galati, in Romania for the Australian Antarctic Division (AAD). The vessel will be operated by DMS Maritime, a wholly owned subsidiary of Serco, and is an integral part of the AAD’s research program in Antarctica and the Southern Ocean.

The signing ceremony was attended by the Tasmanian Minister for State Growth, Mr. Peter Gutwein and Damen Australia Project Director, Magiel Venema. During the event, a number of other regional projects were discussed, including the Sea 1180 Program, for which Damen is in the running. This project will see a new fleet of Offshore Patrol Vessels built for the Royal Australian Navy.

Roland Briene, Damen Area Director Asia Pacific, said of the barge contract award: “This contract with Taylor Bros demonstrates Damen’s strong conviction in the maxim ‘think global, act local’. Wherever we operate in the world we work closely with local suppliers and service providers, participating in knowledge sharing initiatives that work in the interests of all parties. Taylor Bros was a natural choice for this contract, having delivered a number of projects to the AAD previously. Tasmania in general has an excellent reputation for being one of the most effective manufacturing, supply and support bases for Antarctic research.”

The barges, which are being designed, engineered and built locally, by local workers, will carry 45.5 tonne trucks from ship to shore on a continuous basis, giving the new icebreaker an unprecedented capability for unloading and reloading. The construction process of the barges will complete in 2020, when the RSV Nuyina begins her operations, replacing the current vessel, the Aurora Australis.

The RSV Nuyina represents a state-of-the-art solution that will facilitate Australia’s wider exploration of Antarctica and the Southern Ocean. The vessel will be 156 metres in length, with a beam of 25.6 metres. She will be able to break ice up to 1.65 metres at speeds of 3 knots and will supply Australia’s research stations in Antarctica and Macquarie Island with cargo, equipment and personnel. With a 500m2 laboratory and office facilities, the vessel will also serve to conduct research activities. The RSV Nuyina will host up to 32 DMS Maritime crew and as many as 116 AAD scientific personnel, plus a doctor, in climate controlled accommodation.

The AAD’s operations in the region aim at the advancement of Australia’s scientific, strategic, environmental and economic interests in the region and focuses on stewardship, climate research and the study of terrestrial and marine eco-systems.