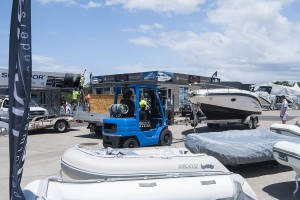 Final preparations are underway for the 3rd annual Gold Coast International Marine Expo, which opens tomorrow at 9am with the official opening ceremony commencing at 10am.

Tipped to break all previous records, this year’s Expo has already recorded a 30 per cent site expansion, an increased display circuit, more exhibitors and more live attractions than previous years, more world releases and almost 100 volunteers are on site to ensure the three day event is yet another success.

Over the past few days more than 200 exhibitors have begun setting up their displays over the 32-hectare Expo site, which sprawls across the Gold Coast City Marina and the Riviera and Telwater facilities, making Expo one of Australia’s fastest growing boating expositions.

The Gold Coast International Marine Expo is a not-for-profit, action packed, family friendly event that offers a unique behind the scenes view of the diverse and fascinating marine industry.

The first exhibitor to register their site as soon as exhibitor bookings opened for the 2013 Gold Coast International Marine Expo was Marine Safety Innovations who will be showcasing Kapten Boats and Collars.

“We exhibited for the first time at last year’s Gold Coast International Marine Expo and we were really impressed with the facility and the support from the marine industry and the public,” Nyomi said.

“This year we will be showcasing the new Waverider aluminium plated boats which have been designed to give a feeling of riding on a cushion of air. These boats come in two sizes, 6.1 metres or 5.6 metres.

“The Expo offers such a huge diversity in exhibitors, attractions and factory tours. It really does bring everyone together and we will definitely be back again next year.”

Everything from kayaks to superyachts, fishing equipment to jet skis and everything else in between will be on show over a 3km display circuit, and with live attractions and demonstrations taking place every 15 minutes, the Expo will definitely be an interactive and memorable event for everyone.

Leigh-Smith Cruiser Sales are proud to have the two largest boats on display at the Expo.

At 115 feet, the Benetti Super Yacht, Emerald Lady, was built in 1982 for Sir Justin Hickey and has travelled as far as Europe and the United States of America, but after a complete refit and rename she was relaunched in 2006 as a luxury charter boat. She has an interesting history, accommodating Hollywood actor Johnny Depp during the filming of Pirates of the Caribbean and has also hosted many celebrities around the world. Emerald Lady will be open for inspection by appointment.

Leigh-Smith Cruiser Sales will also showcase the 92-foot aluminium yacht, Catalyst, which was built by one of the world’s best luxury boat yards, Alloy Yachts in New Zealand in 1995.

“We hope Catalyst will bring a few sailors to the Expo to inspect this magnificent boat and we look forward to showcasing our other luxury vessels, including the world release of the new Alaska 59,” James said.

“The Expo has certainly brought our industry together by including all marine products and brands. I believe it is the friendly atmosphere of Expo, which has allowed people to simply discover boating. This is why Expo is so successful – Expo is more than just a boat show and I look forward to watching this event continue to grow.”

“Expo offers a unique behind the scenes view of the diverse marine industry and this year we are excited to have so many new exhibitors and attractions which is true indication of how much people are embracing the concept of the Expo,” she said.

“The 2012 Gold Coast International Marine Expo attracted 20, 752 people from around Australia, New Zealand and internationally as counted independently by the Rotary Club of Coomera River, which was a tremendous achievement for such a vibrant and new event.”

A gold coin donation is requested upon entry to the Gold Coast International Marine Expo which will be donated directly back to community groups including the Rotary Club of Coomera River, Paradise Kids, the Westpac Life Saver Helicopter Rescue Service and Sailability Gold Coast.

Easy access including free on site parking is another major draw card for boating enthusiasts who will be travelling from across the nation.

The Gold Coast International Marine Expo will be held on November 1-3 from 9am to 5pm with gold coin entry donation and free parking at the Gold Coast Marine Precinct, Coomera. To find out more visit www.gcmarineexpo.com.au