Australian marine export award winners at the 2013 Club Marine Australian Marine Export and Superyacht Industry Awards can express nothing short of pride for the global recognition and standing the reputable ceremony represents.

Once again in 2013, Club Marine is proud to be affiliated with the event as sponsors. Club Marine’s National Relationships and State Manager Corey Yeung said “As Australia’s largest provider of recreational boat insurance, Club Marine is committed to excellence in our own business and we are proud to be able to support AIMEX by sponsoring the Club Marine Australian Marine Export and Superyacht Industry Awards. It is especially important that the efforts and abilities of our outstanding marine export industries are appropriately acknowledged. We congratulate all of this year’s winners and all of the entrants for their efforts.”

Based in Western Australia, VEEM Limited manufactures and supplies marine equipment to vessel and equipment OEM’s and users internationally. The innovation award was presented to VEEM Limited for their VEEM Gyro product range. The VEEM Gyro range features four models and has been developed specifically for the Superyacht market.

This year, Aurora Global Logistics have been awarded the ‘Best Marine Export Performance – medium exporter’ award for their outstanding effort and outcomes in 2012.

Jason Roberts, director of Aurora Global Logistics said “it’s been an honor to be recognised as a key service provider to the Australian Marine Industry. We are a privately owned Australian company and compete daily against large international foreign owned companies and our hard work has finally paid off.”

M-Tech specialize in the manufacture of innovative marine and leisure utility equipment and accessories, ranging from Marina Utility Service Pedestals, Emergency Service Equipment, Sanitation Pump out Equipment to Instant Response Fire Carts. Their export market is growing, and due to the vast stocks that are held in their Queensland facility, spare parts can be exported within 24 hours, anywhere in the world.

M-Tech General Manager Darren Wilkinson said “It’s with great pleasure to receive the award and recognition from AIMEX for the second year running, having such tough competition from the other entrants, and a great testament to all the M-Tech team.”

Riviera is Australia’s largest and most awarded boat builder and exports luxury cruisers that are built on the Gold Coast to a dealer network that spans 66 countries across the globe, including the Americas, New Zealand, Europe and Asia. Riviera Australia was awarded the ‘Best Marine Industry Export Performance – Large Exporter’ in 2013.

Rodney Longhurst Chairman and Owner of Riviera Australia said “Receiving this prestigious accolade is a very gratifying reward for our 300 strong master boat builders and dedicated staff who have rallied behind Riviera to allow us to continue to grow in challenging times. I would like to publicly thank and praise our entire team for their commitment and resolve. As our new model development program continues to gain momentum we and our growing international dealer network are very excited about the future of Riviera. This week we announced the purchase of the 14 hectare Riviera facility, the largest of its kind in the southern hemisphere at Coomera such is our belief in the future of Riviera.”

The judging panel of the 2013 awards could not over emphasize the high caliber of applications in the Australian marine export industry sector. After much deliberation it was decided to award Superior with a Highly Commended recognition for the ‘Best Marine Industry Export Marketing Strategy’ award.

Superior CEO John Hogan said “Our brand values consistently focus on trust and personal service which has enabled Superior to focus on strategies for new industries for new products in addition to our traditional recreational marine lines. It’s a great honour to be recognised for the work we have been undertaking around the world.”

The awards ceremony was staged at the ASMEX Gala dinner on May 21 in Sanctuary Cove, Queensland.

For more information on the awards results and categories, please contact admin@aimex.asn.au 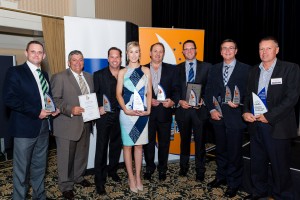