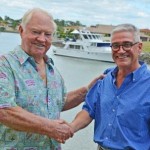 After three years at the helm of the Expo Committee, Mr Milne said it was time to hand the reigns over to Gold Coast boating and business leader, Patrick Gay AM.

Mr Gay founded Gay Constructions in 1955 and has created many high profile developments, including the River Links estate in Helensvale.  In 1988, Mr Gay and Jeff Leigh-Smith started Gold Coast City Marina & Shipyard and 10 years later at the 2008 Australia Day awards ceremony, Mr Gay was honoured with the Order of Australia Medal (AM) for service to the construction industry, educational and youth social welfare organisations, and to the sport of game fishing.

Mr Milne said he was proud to welcome Patrick Gay, owner and chairman of Gold Coast City Marina, as the new Expo president.

“Mr Gay is a very active boater and stalwart supporter of the Gold Coast International Marine Expo and the marine industry, and I am thrilled he has taken up the role of president,” Mr Milne said.

“It has been a joy and an honour to be part of a team creating such a great family boating event from scratch with an extremely limited budget.  And it was certainly the raw passion, belief and commitment by a lot of people that have made Expo what it is today.

“I am proud of Expo’s philosophy, to showcase the boating industry in a different and affordable format, and I believe we have achieved a great deal in a very short time period.

“Over the past three years Expo has welcomed over 60,000 people through the gates and we have raised more than $50,000 for our four local charities – that is a tremendous effort and Expo would not have been possible without the support of the community in the form of almost 90 volunteers and the boat loving public.

“As Expo continues to grow, I know Mr Gay will help to steer this not-for-profit event to the next level and I look forward to continuing to be an active part of Expo as a committee member.

Expo’s event and marketing co-ordinator Emma Milne said there would be a number of changes introduced this year based on exhibitor and community feedback, including a date change and the introduction of a modest entry ticket price.

“We have decided to bring the Expo dates forward to October 17, 18 and 19 when the weather is a little cooler and to avoid conflicting with other major events such as, the Melbourne Cup and the Fort Lauderdale International Boat Show.  This date change will also allow our exhibitors more time to prepare boats sold at the Expo ready for pre-Christmas delivery.

“As Expo continues to grow, there will be a greater need for more volunteers and community support, and the Expo Committee hopes to raise even greater funds each year for the local community, which has prompted the move from a gold coin donation entry to the introduction of a nominal ticket price of $8 per adult, $5 for seniors (senior card must be presented) with children under 15 years of age being admitted free when accompanied by an adult.

“Expo will still offer free onsite parking at the gate and exhibitor display rates will be held at the same level as 2013 as we continue to strive to deliver value for Expo visitors and exhibitors.  Expo will also continue to support the Rotary Club of Coomera River, Paradise Kids, the Westpac Life Saver Helicopter Rescue Service and Sailability Gold Coast.”

“I am proud of the work that has been done by my predecessor and the dedicated Expo committee and I look forward to growing the Gold Coast International Marine Expo into an event that is not only recognised statewide or nationwide, but internationally,” Mr Gay said.

“It is important that we, the boating community of the Gold Coast, present a united front and to that end I am hoping to arrange a meeting with the Premier about the dredging of the Coomera River, as it is imperative for all our stakeholders, the well being of the marine industry and boating generally.

“We have created a new date for the Expo, which we hope will attract even more visitors and more exhibitors, as we endeavour to not compete with any other high profile events.

“I look forward to working with the passionate and dedicated Expo team as we start preparing for the 4th annual Gold Coast International Marine Expo.”

As founding president, Mr Milne has been an integral part of the Expo’s growth over the past three years, and the success of this event in bringing the boating industry and community together has been one of the many highlights of Mr Milne’s 34-year marketing career.