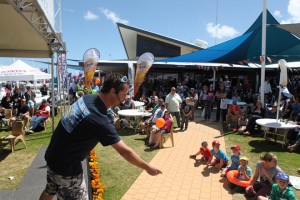 2013 Club Marine Mandurah Boat Show a success for all involved!

Show Director Peter Woods said he was thrilled with the response to the 2013 Show, saying that crowd numbers and exhibitor feedback was a positive reinforcement that the boating and fishing industries in WA is entering a resurgence.

“We had almost 19,000 visitors to the Show over the weekend, which is an increase in over 5% on last year’s numbers,” Peter said. “It was great to see so many families out enjoying themselves, and we are pretty sure that our Show Ambassador Paul Worsteling had a bit to do with that! The weather was on our side for most of the weekend and the location of the Show at the Mandurah Ocean Marina is just so ideal that you can’t help but enjoy the surroundings.”

“Exhibitors spent the weekend telling us how well they were going and what a great response they were enjoying from visitors, which is always nice to hear.”

“Generally there was a great positive vibe, an optimistic outlook that an industry which has recently seen hard times is about to start picking up. Exhibitors were commenting that visitors were actually buying, or planning to buy within the next six months, rather than just looking.”

“We are proud that the Club Marine Mandurah Boat Show is helping the industry to grow, and we look forward to seeing even more positive results in future,” Peter said.

The Show’s major Sponsor Club Marine was present again at the Show and State Manager Carina Campo said she was pleased with the event, and enjoyed all the positivity that she saw and heard. “We spoke to many dealers across the weekend and it was so nice to get such positive feedback,” Carina said. “It seemed the “doom and gloom” from previous years was completely gone and there was now a much more upbeat vibe. It was an excellent Show and a great weekend all round!” Making sales!

The 2013 Show had more than 140 exhibitors displaying their products, and the response to the Show was positive. Ben Patrick from Halco summed up the weekend nicely when he commented that: People just seem to be keen to get ready for summer – and it’s great to see so many people wanting to get into fishing again!

Other exhibitors enjoyed a successful show, and in particular, success that they hadn’t seen in years. Dean Howard from Fab Dock went as far as to say that the 2013 Club Marine Mandurah Boat Show was simply “the best in the world”! “I have been to 11 Boat Shows across the world this year, and the Mandurah show has by far been my most successful,” Dean said. “We’ve had the best response to our product here and had so many enquiries. We’ve come to Mandurah from the Gold Coast and it’s just been an awesome weekend, definitely worth attending.”

Trevor Parkins from Maritimo said that the responses they were getting were all positive, and they had a lot of genuine interest in their products. “It’s been a really good show for us, and it’s great to see there is a lot more confidence in buyers. The economy is looking good and people are more confident,” he said.

Exhibitor R Marine Mandurah use the Show for the West Australian release of the Riviera 445 SUV, and Paul Cotton from R Marine said they’d had a huge response. “The crowds have been great and we’ve had a lot of enquiries – so much so that we are confident we will move two or three of these boats as a result of the Show,” he said.

Fleming Yachts representative Sam Nichols also announced good enquiries, saying that they had booked at least two or three sea trials of their boat and that was the whole point of the Show. “We don’t expect to make a sale at the show but to plant the seeds,” he said. “It’s been very worthwhile being here, we’ve had quality people on the boat and some who have come back a second day for another look, which is great.”

Tom Blaxell from Mansfield Marine agreed, saying they too had a lot of genuine interest, and were confident at making sales from leads generated at the Show. A great day out!

The Club Marine Mandurah Boat Show is famous for being more than just a boat show, and this year was no exception.

The 2013 Show ambassador was Paul Worsteling (iFish), one of the most recognisable – and probably the most photographed – face in fishing! Paul was at the Show all weekend, telling stories and answering questions on stage, and then meeting fans. He was never without a smile, and always had time to stop for a photo and a chat.

“I really love this show,” he told organisers on the final day. “It’s such a fun event and everyone is having a great time!” When asked will he come back next year, his response was “I haven’t been invited yet” which led organisers to make a note to book him again for next year’s Show!

Paul’s wife Cristy and 6-year old son Jett who also make appearances on iFish were at the Show and at times were stealing Paul’s limelight in greeting fans! The Show also featured a range of entertainment designed for the whole family. Metro Modelling agency provided models and dancers for some amazing fashion parades across the weekend.

Club Marine chef Bart Beek was onstage across the weekend presenting cooking demos and promoting the new Club Marine Gourmet cookbook. Special guest Emma George, ex-Olympic pole-vaulter, was on stage talking about kids and fishing, and telling her stories of fishing trips with her young sons in a hope to inspire more families to get out there and cast a line!

On the Western Angler Fishing Stage, demos were held all weekend with speakers such as Scott Coghlan, Mike Roennfeldt, Peter Anderton and more sharing stories, giving tips and demonstrating their craft. As always the demos on fish filleting were extremely well received, and of course when iFish star attraction came on stage, he stole the show!

Kids were kept entertained all weekend with the Kid’s Casting Competition that was run by volunteers from Fremantle Amateur Angling Club. Kayak rides on the beach and small boat rides were also very popular; and the real little ones loved catching up with Pirate Jolly Jim when he took to the stage with his hilarious songs and antics on the Saturday and Sunday.

One lucky person, David Evans from Edgewater, who attended the Show on Sunday, was certainly glad he did when he received the call that he was the winner of a new boat! Thanks to Aquasports Marine, David will take home the new Bayliner 160 Element, which was the Show’s major prize. The Element was on display at the Aquasports Marine site, and gained so much attention that Aquasports Marine’s Nick Toro missed the prize draw on Sunday afternoon because he was with a customer, who was buying a Bayliner for themself!

The success of the 2013 Show has left organisers in great spirits about next year’s Show. The 2014 Show will be held on 10-12 October 2104 at the Mandurah Offshore Fishing and Sailing Club. The prospectus will be available to exhibitors early next year.