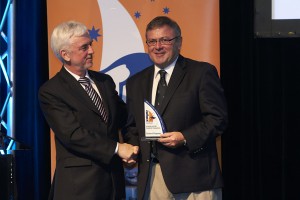 Richard Chapman, Managing Director of Coursemaster Autopilots and current President of AIMEX Board was announced winner of the 2014 Marine Export Industry Champion Award at the Industry Gala Dinner on Tuesday 20 May In Sanctuary Cove, Queensland for his outstanding achievement and contribution to the industry.

Richard Chapman has been heavily involved in the marine industry for over 35 years. He was a founding director of AIMEX and played a pivotal role in the organisation’s formation. Richard is also the managing director of two of Australia’s most notable marine equipment manufacturers; Coursemaster Autopilots and Hydrive Engineering.

Coursemaster Autopilots in Sydney Australia have specialised in autopilot technology for over 38 years. They manufacture a range of autopilots for sailing and power boats, commercial and leisure vessels. Hydrive Engineering, the largest manufacturer and exporter of hydraulic boat steering gear in the Southern Hemisphere, builds one of the widest ranges of precision-built, award winning, hydraulic boat steering equipment to suite outboards, stern drives, jets or inboard motors on boats from 5 metres to 80 metres.

Sean Griffin, GME International Business Manager said “Richards’s genuine enthusiasm, passions and advocacy for the industry are totally infectious. I believe as the quintessential “quiet achiever” his enduring contribution to the Australian Marine Export effort should be formally recognised”.