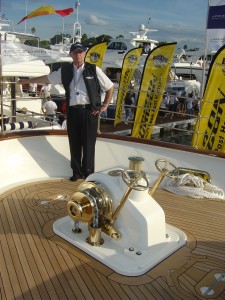 John Muir, Director of globally renowned Muir Winches, was inducted into the Australian Marine Export and Superyacht Industry Hall of Fame recognizing his outstanding achievements and significant contribution to the marine export and superyacht sector. The announcement was made at the Industry Gala Dinner on Tuesday 21 May in Sanctuary Cove, Queensland.

Muir Windlasses manufactures anchoring and mooring systems for smaller pleasure craft between 10 and 28 metres and for mega yachts and work boats between 30 and 120 metres.

“John is an extremely driven and passionate man not only about his own business but also for the marine industry that he works in” said Muir managing director Matthew Johnston.

The Australian Superyacht Hall of Fame was an initiative first introduced at the annual Australian Superyacht Awards in 2008 by the former peak body for the industry Superyacht Base Australia (SYBA), the inductee into the Hall of Fame in 2008 was Mr Donald B Johnston, founder of Oceanfast. The Australian International Marine Export Group (AIMEX) has reintroduced this award in 2013 as they see this as an excellent platform for well-deserved recognition of the significant achievements of an individual’s dedication to the industry.