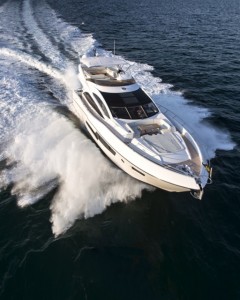 The 2013 Club Marine Mandurah Boat Show is on this weekend, and this year the event is set to dazzle and shine!

Barbagallo have announced they are bringing the magnificent Rolls-Royce Wraith to the Show as part of the Australian launch of this exciting new vehicle.

The Rolls-Royce Wraith is the most powerful Rolls-Royce in history, with 6.6 litre, twin turbo-charged V12 engine delivering 624 bhp with 800 Nm of torque – it powers from 0-60 mph in 4.6 seconds!

Never before seen in WA, the Rolls-Royce Wraith will surely be a talking point at the Show as it sits in prime place at the Sunseeker VIP display.

Show organiser Peter Woods said the inclusion of the Rolls-Royce Wraith was fitting at this year’s show as part of the Sunseeker display.

“Sunseeker are already gaining attention for their newest release, the Sunseeker 8- Sports Yacht, which will be shown in its world release at the Show this year. This amazing yacht is worth $7million

and is one of the most eye-catching displays we have ever had at the Show,” Peter said.

“The boat was intended to be released at the Sydney Boat Show in August but wasn’t ready in time, and we are thrilled that Sunseeker have chosen the Mandurah Show for its world release.”

Barbagallo will also be displaying a number of vehicles on Supercar Promenade, including:

All vehicles will be on show across the weekend and are available to purchase – or just to admire! Combine the luxury cruisers and exciting sports vehicles with glamorous jewellery, and it really

becomes a feast for the eyes! For the first time, Linneys will be showcasing a stunning collection of jewellery at the Show. The jewellery showcased will be inspired by the ocean, with the designs

carefully handcrafted to capture the natural beauty of the Australian South Sea pearls. For the diamond connoisseur, they will also be showcasing the rare and collectable West Australian Argyle

pink diamonds. Linneys are excited to be showcasing some rare and unique pieces of fine jewellery at this year’s Show.

The 2013 Club Marine Mandurah Boat Show begins 10am this Friday.

NOTE: Official launch of Sunseeker 80 will take place at 11.30am Friday 11th October.