Protection for our reef starts at Gold Coast City Marina 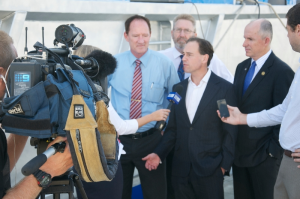 A new patrol vessel, jointly funded by the Commonwealth and Queensland governments, will soon take to the water to monitor and protect the Great Barrier Reef.

The new vessel is expected to be operational in May and will replace the 24 year old Kerra Lyn which has been an integral part of field work and enforcement activities for the past two decades.

It is twice as fast, more environmentally friendly, and more cost-effective than its predecessor and will provide reliable access across the 348,000 square kilometre Great Barrier Reef World Heritage Area.

The joint field management program run by the Great Barrier Reef Marine Park Authority and Queensland Parks and Wildlife Service will use the boat to undertake activities on the Reef.

“A typical day might involve monitoring compliance of zoning rules, maintaining facilities such as camping grounds and moorings, fire and weed control on islands, working with Traditional Owners on their sea country, or responding to boating or shipping incidents,” Minister Hunt said.

“The new vessel improves our ability to respond to incidents quickly, and to service all parts of the Great Barrier Reef Marine Park, saving time on the water allowing for more work to be undertaken on important seabird and turtle rookeries in the remote areas of the Marine Park.”

“This means rangers will be able to do more work on Raine Island, the largest known green turtle rookery in the world. This includes monitoring nesting and hatchling rates, and maintaining some fencing of phosphate cliff edges on the island to make sure breeding females make it back to the water safely,” Minister Hunt said.
A large bank of solar panels powers the vessel reducing the use of diesel generators, cutting emissions by 30 per cent and lowering annual operating costs.

“The new boat can operate away from port for 12 weeks, has a range of up to 2000 nautical miles and speeds of up to 25 knots, plus it can carry up to 28 people on day operations, so it really will give us the freedom to spend more time on those activities that protect the reef and support the tourism industry,” Mr Dickson said.

Mr Dickson said more than 60 Gold Coast jobs had resulted from the partnership with MEC yachts at Coomera.

“MEC yachts is also building two 12-metre barges to be based in Townsville and Gladstone, which will further expand the capacity to patrol the Great Barrier Reef Marine Park,” he said.

“The contracts represent a significant investment in the Gold Coast boating industry, supporting 63 jobs at MEC Yachts based at Gold Coast City Marina directly and a further 20 subcontractor jobs indirectly.

“All three vessels will promote the world-class capabilities of the Gold Coast boat-building industry while protecting one of Australia’s greatest natural assets- the Great Barrier Reef.”