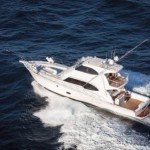 It has been a busy start to the New Year for Riviera, Australia’s favourite and most awarded luxury boat builder, with two of its flagship 75 Enclosed Flybridges under construction for owners in Asia and Dubai.

Riviera’s international sales director, Chris McCafferty, said it was an exciting time at Riviera with two 75s in production.

“Riviera is going very well and the fact that we have two of our flagship models under construction and many other larger models also in production is certainly a positive start to 2014,” Mr McCafferty said.

“The boating industry is getting smarter and with new technology such as digital switching, integrated thrusters and joystick controls, boats are becoming easier to operate, easier to run and easier to manoeuvre, which I believe has encouraged people to buy larger boats.

“The demand for big boats is certainly increasing and we are currently quoting several other 75 clients for 2015 delivery boats.  Riviera’s reputation for building high quality, high performance boats with superior finishes is certainly recognised by international buyers who are coming down under to buy their new dream boat.

“We are increasing our team of master craftsmen to meet this growing demand for Riviera’s large boats and will display a new 75 at the Festival of Boating in May and Sydney International Boat Show in August.”

Mr McCafferty said hull and deck number two was released from the mould just before Christmas and the mould was prepped for hull number three to be layed-up early February.

Hull number two was purchased by a multiple Riviera owner in Asia, who enjoys fishing, diving and entertaining, hence the twin cabin forward for crew and single guests aboard for expedition trips.

“This boat also features a large barbecue and serving area with built in sink and bait tank in the transom for on-board entertaining.  Off to port there is a live bait tank for fishing adventures,” Mr McCafferty said.

Hull number three is bound for an owner in Dubai and like the recently completed 63 Open Flybridge, will undergo a series of customisations to suit the Middle East climate, such as increasing the size of the air-conditioning.

Riviera’s Dubai dealer Francesco Pitea said the owner of this boat requested a special interior fit out and custom layout to accommodate on-board entertaining such as, an increased mezzanine platform, customised flybridge with L-shaped lounge and L-shaped helm companion chair, forward saloon windows to bring light into the saloon and lower companionway, crew cabin, large hull windows to every cabin, and a children’s retreat below decks with television, game console, Pullman bunk and desk.

“Middle Eastern customers like lots of space and prefer boats larger than 60 feet.  Riviera is now really competing with the European brands in the Middle East as customers are recognising Riviera’s world-class quality.

“We are excited about the future of Riviera in Dubai and look forward to showcasing these luxury boats at our upcoming and future boat shows.”

Riviera’s new flagship 75 Enclosed Flybridge capitalises on 34 years of boat-building experience and has been a particularly popular model with six 70 Flybridge boats produced prior to the hull extension to 75 feet, where a further three boats have been sold.

It is the ultimate long-range cruiser with a range of engine options to suit an individual owner’s requirements.  Hull numbers two and three feature an 8600 litre fuel tank capacity and twin MAN 12v 1800hp engines with an expected cruise speed of 26 knots.

The aft door and awning window open the saloon to the cockpit creating one massive entertaining space with an aft facing mezzanine lounge and electric barbecue.  The cockpit is ideal for fishing enthusiasts with an alloy plate reinforced into the floor for a game chair, storage bins, optional live-bait tank and toe kicks moulded into the bottom of the coamings.

Below decks, the 75 offers accommodation for up to 10 people in four cabins, including the full-beam master stateroom with king-size island bed, his and hers walk-in wardrobes, two-seater lounge and 32”LCD TV and five-speaker sound system, and very generous ensuite bathroom.

All round, this sophisticated model exudes opulence and is proudly the largest semi-production luxury cruiser built in Australia.

In 2012 Riviera celebrated the launch of its 5000th boat, the 445 SUV, a significant achievement in the company’s rich 34-year history.