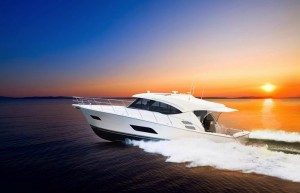 The largest and most sophisticated Sport Yacht in the Riviera fleet will make her world premiere at the Sydney International Boat Show held from July 31 to August 4.

This latest model from Australia’s favourite and most awarded luxury boat builder is a combination of Riviera’s 34 years experience and global owner feedback which has resulted in the birth of Australia’s ultimate entertainer, the new 6000 Sport Yacht.

Dubbed the flagship of the Sport Yacht fleet, the new 6000 will lead an impressive line-up of luxury Riviera and Belize boats valued at $17 million, including the 43 Open Flybridge, 50 and 75 Enclosed Flybridges, 445, 565 and new 515 SUV (which will make her Sydney premiere at the show), the 5000 Sport Yacht and a Belize 54 Daybridge.

“The new 6000 Sport Yacht will certainly impress the boating aficionado with her sleek external styling featuring a solid and robust hull with large hull windows standard to every cabin,” Mr Longhurst said.

“Riviera’s expert Australian-based European designers have taken every detail into consideration from the bow to the stern to ensure this boat is a luxurious high performance vessel akin to a floating six star resort.”

The new 6000 Sport Yacht was built for entertaining with an aft galley with awning window that opens the generous cockpit and provides plenty of seating both indoors and outdoors for onboard entertaining.  At the rear of the cockpit and to centre is an external wet bar with sink, ice maker, drawer fridge and twin barbecues.  The cockpit also features a large GRP fibreglass sunroof that extends over the seating area to provide protection from the elements but can also be opened to bring sunlight into the alfresco entertaining area.

The aft galley is located in the entertaining hub of the vessel with central access to the cockpit and saloon. The well-planned saloon is perfect for indoor entertaining or relaxing with a U-Shaped lounge around a dinette table that seats six adults and a large two-metre long three-seater lounge opposite.  The three-seater lounge is large enough to enjoy a lazy afternoon nap and versatile enough to provide an additional dining area by simply moving the middle seat base out as an ottoman and lifting up the table located between the two remaining seats.

Forward of the saloon is the impressive helm station which has been cleverly sunken into the dash to improve visibility and ergonomics in this new helm styling.  Featuring enough space for two 19-inch display screens and two navigator chairs.  The saloon also features a large glass Webasto marine sunroof to bring light and fresh air into the saloon area at anchor and underway.

Below decks is a spacious and versatile accommodation plan featuring four staterooms and three bathrooms.  The full-beam master stateroom is a key feature of the new 6000 with a king island bed centre with a sliding door on the starboard side giving access to an extremely generous walk-in robe. There is also a roomy ensuite to port featuring sliding door entry and large port hole to bring in natural light. Forward of the island bed is the dresser with wall-mounted television and to starboard is a large lounge forming a cosy parent’s retreat.  A spacious utility room is located behind the master stateroom and can be accessed via the master wardrobe, cockpit or engine room.

IPS also delivers lower fuel consumption, and fewer CO2 emissions along with less vibration and, notably, first-class maneuverability thanks to the twin drive units (or pods), each of which is capable of turning independently to provide correct thrust to move the boat in the precise direction required either through wheel or joystick docking controls.

Indeed a skipper – either solo or with a novice crew – can simply push and twist the joystick to make the boat respond immediately, pivoting in place or crabbing sideways into a berth that’s just long enough to fit the vessel. In the 6000SY, there’s an additional joystick in the cockpit area for even better easier berthing as well as a standard integrated GPS for station-holding whilst preparing lines and fenders, before docking or rafting up, or whilst waiting off a fuel jetty.

Riviera’s CEO Wes Moxey said the Sydney International Boat Show would also mark the Sydney premiere of the new 515 SUV, which made her world debut at the Riviera Festival of Boating in May.

The 515 SUV is the third generation in Riviera’s cross-over SUV range which combines the high-performance, bluewater cruising and fish-raising abilities of the classic Riviera Flybridge with the single-level leisurely entertaining features of the very popular Sport Yacht series.

The result is a vessel like no other – a true bridge between them both.

“The 515 SUV retains all the familiar aspects of Riviera boatbuilding: the purposeful lines, hefty scantlings, the solid feel in a seaway, the spatial sense, the layout and sumptuous décor … as well as a full no-nonsense Flybridge-scale cockpit,” said Mr Moxey. “But look closely and you’ll discover the 515 SUV has myriad new design aspects to enhance practicality and comfort whilst retaining key elements of the distinctive performance and reliability for which Riviera is renowned.”

Below deck on the 515 SUV is a flexible accommodation plan featuring three very generous-sized staterooms and two bathrooms. The master stateroom can be located either forward or aft and has an ensuite bathroom in both optional layouts to allow owners to truly personalise their vessel. The two aft cabins offer full head-room while large hull windows with opening port holes on both sides give an abundance of natural light and fresh air. Optional hull port lights are available for the forward stateroom.

The SUV’s confident offshore poise comes, to a large degree, from Riviera’s leading-edge technology and legendary build quality that combine super-strong hand layups with solid GRP bottom and structural core material in the hull flanks, main deck and hardtop, as well as precisely fitted lightweight resin transfer molded small parts that are pre-fitted for a perfect seal when all major components are bonded together.

Sea trials with the twin IPS 800s had the 515 SUV cruising at 28 knots with a top speed of 32 knots under full load (full fuel and water).

Be among the first to inspect these exciting new models at the Sydney International Boat Show in July.  Riviera and Belize will have their team of expert professionals and R Marine dealers from around Australia and New Zealand on-hand to assist with any enquiries at their floating display located on the southern end of the Cockle Bay Marina, Darling Harbour from July 31 to August 4.

In 2012 Riviera celebrated the launch of its 5000th boat, the 445 SUV, a significant achievement in the company’s rich 34-year history. 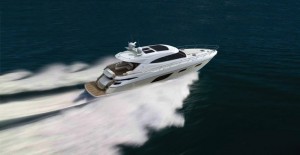