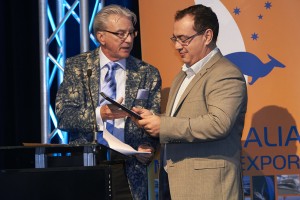 Sam Sorgiovanni,  a well-known Australian personality and renowned for his excellent yacht design skills, was inducted into the Australian Superyacht Industry Hall of Fame at the Industry Gala Dinner on Tuesday 20 May in Sanctuary Cove, Queensland for his outstanding achievements and contribution to the industry.

Sam has been heavily involved in the superyacht industry for over 20 years. He is the owner of the Sorgivanni Designs Studio located in Fremantle established in 1996. Sam and his team are well known for providing the highest standard in the Yacht Design. This, together with the creative individuality and attention to detail ensures that Sam is respected and sought after in this industry.

Sam’s biggest achievement is to have been recognised amongst other internationally acclaimed selective designers and has been nominated and acknowledged as the winner for best design for a number of superyacht build projects over a period of 12-15 years.

He also proudly represents the Australian Superyacht industry and unashamedly specifies Australian products within his design if they meet the specification and quality requirements.

The Australian Superyacht Hall of Fame was an initiative first introduced at the annual Australian Superyacht Awards in 2008 by the former peak body for the industry Superyacht Base Australia (SYBA), other inductees into the Hall of Fame include Mr Donald B Johnston, founder of Oceanfast and John Muir, Owner Muir Winches.  The Australian International Marine Export Group (AIMEX) reintroduced this award in 2013 as they see this as an excellent platform for well-deserved recognition of the significant achievements of an individual’s dedication to the industry.