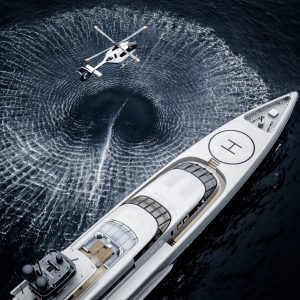 “The partnership with China Zhongwang marks the start of an exciting new era for SilverYachts,” said Guido Krass. founder of SilverYachts.

“SilverYachts is dedicated to building all-aluminium superyachts. Having China Zhongwang on board will allow us to continue to create and build innovative aluminium superyachts for the world market. China Zhongwang’s strong backing will enable us to accelerate our rate of expansion and broaden our market reach. Going forward, SilverYachts has plans to expand its team in Australia as well as in China.”

“Our Silver series of yachts are groundbreaking in design and building philosophy, in the way the volumes are distributed longitudinally rather than vertically, which allows a high length to beam ratio, creating greater efficiencies in terms of performance. The Silver series of yachts reflect the basic core values of sound engineering principles, where simplicity prevails over complexity and finds its inspiration in the slender and efficient monohulls, developed before lightweight materials and high speed high power diesel engines were available. Applying the same basic naval architectural concept in combination with today’s state of the art, lightweight aluminium construction and modern engine technologies is the brainchild of Guido Krass and myself. We look forward to designing the next generation of the Silver series with China Zhongwang, for both the global and the Asian market,” added Espen Øino, internationally renowned naval architect and yacht designer.

One of the existing strategies of SilverYachts is to establish an additional shipyard in China to build superyachts or commercial vessels customised for the growing Asian market with the support of China Zhongwang. The Western Australian-based shipyard will remain a technological frontrunner, with a new series of larger vessels targeting the upper segment of the international market, such as the 100 metre Silver Global.

SilverYachts was founded by Guido Krass in Perth, Australia in 2005. For the Swiss-based, German entrepreneur setting up the shipyard required a lot of commitment in terms of capital, time, patience and effort. Where others were giving up, Guido Krass continued taking risks in order to finance the construction of all the yachts. This determination bolstered SilverYachts’ brand and showed the world the luxury, high-performance yachts that his Australian team builds. With the same confidence, China Zhongwang has secured the opportunity to partner with Guido Krass and Espen Øino to further invest in the company’s technology and leverage its proven track record and industry position.

Australian Managing Director Mr. Dave Woods will continue to lead SilverYachts’ development after the acquisition, and its day-to-day operations will remain unchanged, while Guido Krass and Espen Oeino remain as involved as they were before. SilverYachts currently has approximately 150 employees, who are very busy completing the 85-metre M/Y Silver Loft, the company’s new, fast, world exploring yacht, with the construction of a sister-ship about to commence.

“The staff at SilverYachts are very excited to be part of the next chapter of the company”, says Dave Woods.

“The strategic partnership will have no impact on current staffing levels at SilverYachts, in fact we’re optimistic it will create more job opportunities. And the more than 250 local Australian suppliers will benefit from SilverYachts’ expansion.”

SilverYachts operates out of purpose built facilities, long-term leased at an industrial marine area in Henderson. The facilities occupy more than 20,000 square metres, including two major shipbuilding halls, a fit-out hall, workshop spaces and design offices and there are plans to expand its interior furniture manufacturing facilities.

China Zhongwang Holdings Limited, is the world’s second largest aluminium extrusion company. It is listed on the Hong Kong Stock Exchange with a market cap of HKD 24.03 billion (EUR 2.62 billion) and annual sales revenue of RMB 16.7 billion (EUR 2.14 billion) and employs over 20,000 employees.

“We are delighted to join hands with SilverYachts to navigate the high-end marine sector at full speed,” Mr. Lu Changqing, President and Executive Director of China Zhongwang, said. “SilverYachts is one of the pioneers in building large-sized, all-aluminium ultra-luxury superyachts. It has an international reputation for producing visually striking, aerodynamic, high-performance, and fuel-efficient luxury superyachts, widely known as the ‘sports cars of the ocean’. Both companies share the same vision of offering best-in-class products that exceed client expectations. The acquisition is a significant step for China Zhongwang to become an active player in the high-end marine segment, and adds considerably to our international expansion.”

The main reason China Zhongwang invested in SilverYachts is because of their aluminium hull design, aluminium marine expertise and shipbuilding capabilities, which will be beneficial to their aluminum deep processing business. SilverYachts has a very good track record with high-profile clients and has been financially healthy and debt-free. China Zhongwang recognised a good opportunity to further enhance its profitability and the potential to develop other businesses such as commercial vessels, which is in line with their corporate strategy of expanding in all sectors of transportation.

The transaction was completed this month and announced in a press conference held today in Beijing, China. Details of the transaction value have remained undisclosed.