Waterscape by Superior has taken out the Innovation Award at the 2014 International Superyacht Society (ISS) Awards of Distinction. 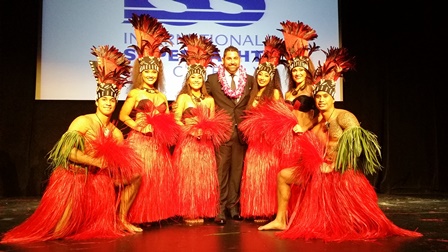 Representing superlative achievement with a focus on sustainability, the awards were presented 29 October at the 24th Anniversary of ISS’s Awards Gala in Fort Lauderdale, Florida during the Fort Lauderdale International Boat Show.

The Excellence in Innovation Award was accepted by David Hogan, son of Superior CEO, John and Jackie Hogan in front of an international audience of yachting brands and dealers, industry organisations and media.

These ISS Awards recognise excellence in the superyacht and broader industry. The Excellence in Innovation Award is open to every aspect of the industry, from crew training to technological advances to environmental stewardship.

“It’s an honour for me to receive this award, testament to a lifetime’s work and passion of the team at Superior,” said David. “Waterscape embodies insightful Australian ingenuity, creative flotation solutions and use of recyclable materials.

“Our mantra is ‘Walk on Water’ which is what we’ve achieved in every facet of the company. Waterscape is the ultimate expression of this.”

Waterscape was unveiled to European audiences at the Monaco Yacht Show in September, where is evoked considerable interest from the superyacht fraternity, designers, brokers and the high-nett worth individuals the show attracts.

“Waterscape adds another dimension to waterfront living and entertaining,” explained John Hogan. “We see a myriad of applications for superyachts, yacht clubs, marina precincts, luxury homes and hotels. Anywhere there is a body of still water, Waterscape will extend the usage and enjoyment of the on-water experience.”

John Hogan said he was “thrilled and very proud” of winning the 2014 ISS Excellence in Innovation Award. “The ISS has a distinguished reputation for its support and promotion of the world superyacht industry.

“This award recognises innovation with an emphasis on sustainability, which is what Waterscape stands for. To win this accolade is gratifying and indeed an honour.”

For more than 25 years, the Superior Group has delivered design-led flotation solutions to achieve the improbable: extending your liveable and usable space on water.