Home » The SOS Recovery Ladder now has a Sock

The SOS Recovery Ladder now has a Sock

Due to popular demand from the short handed crews and those who want to prepare well beforehand, the SOS Ladder can now be enclosed in its own Sock and be attached to the toe rail ready at a moment’s notice.
Once the ladder is secure to boat, it is then concertina folded into the ‘Sock’ leaving the release rope protruding downwards. The ladder is now set up and can be pulled or extended out by pulling down on the release rope whilst at sea level.  It weighs only 470 grams and the length is 257cm and available from leading ship’s chandlery’s, Whitworth’s, SOS Marine and Southern Seas.
SOS Marine develops safety and rescue equipment for 13 national defence forces worldwide. 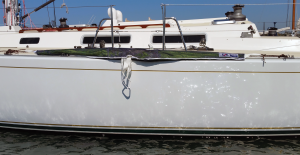