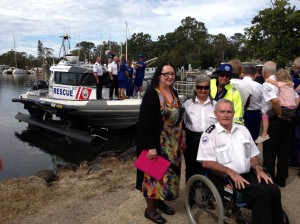 The critical role that Government and commercial marine organisations play across all aspects of marine safety and   environmental protection is often understated. These organisations can often experience significant vessel downtime through costly maintenance repairs as a result of having vessels moored in the harsh marine environment.

By investing in an AirBerth Boat Lifts, commercial organisations across the world have the ability to keep their vessels in peak performance. This initial investment is recouped within a short period of time through the significant reduction in ongoing maintenance costs.  During emergency response situations the AirBerth system enables vessels to be rapidly deployed in a safe and secure manner. Throughout the commercial sector the AirBerth Boat Lift range is renowned for its proven performance across international markets.

As a market leading environmentally friendly product, the AirBerth system eliminates the need to use toxic anti-fouling paints. Significantly this enables Government and Commercial organisations to take a leading position in the conservation of the marine environment.

During the recent 2013 Club Marine Australian Marine Export and Superyacht Industry Awards held at Sanctuary Cove during the ASMEX conference, AirBerth Boat Lifts were pleased to be recognised as a finalist in the 2013 export performance category.

The team at AirBerth are excited about the market opportunities for the second half of 2013 and they will be looking to further expand their International dealer network throughout the year.

View the AirBerth in action here