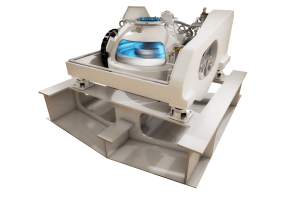 At the recent 2013 Club Marine Australian Marine Export and Superyacht Awards, VEEM Limited were awarded winners of the Innovation Category for their latest innovation, the ‘VEEM Gyro’ resulting in substantial inquiry about this new to the market product.

Launched at METS in 2012, VEEM Gyros are actively controlled by vertical axis gyro stabilisers, delivering excellent rolling motion attenuation while the vessel is at anchor, drifting, alongside, loitering or at transit speed. VEEM Gyros reduce rolling motions by up to an amazing 95%+ depending on the wave environment and vessel characteristics.

The four products are the culmination of almost a decade of research and development and represent an important step in gyro performance for superyachts, as well as commercial and military craft. Producing significantly more power and performance than any other existing product running in a vacuum, the new VEEM Gyro range completely removes the requirement for fins.

VEEM Gyrostabilisers are powerful, highest quality roll stabilisation devices which are specifically engineered for use on large boats and small ships. The combination of their unwavering passion for beautiful design, engineering excellence, and VEEM Limited’s long history of manufacturing and supporting the highest quality marine equipment has resulted in a truly class leading series of products.