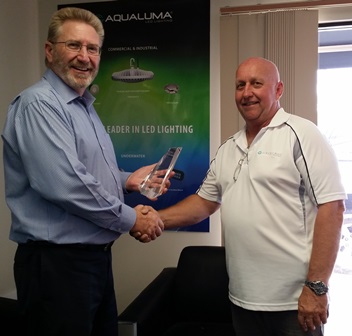 Michael Crandon, Member for Coomera, has congratulated local business Aqualuma owners, Carl and Grant Amor, on being recognised at the 2014 Premier of Queensland’s Export Awards.

Mr Crandon said, “I’ve had the pleasure of meeting with Carl and Grant and inspecting the “old” factory and their new “state of the art” facility, to see for myself the innovations they have introduced to the world market”.Aqualuma won the award for Environmental Solutions.

“I congratulate Aqualuma for their outstanding success,” he said.

It has since become a world-leading lighting solutions provider, across numerous industries, globally.AQUALUMA began as a quest in 2004 to innovate superior lighting for the marine industry.

Their ongoing commitment to R&D has yielded significant returns, including a growing-portfolio of premium-quality LED-lighting solutions and IP rights.

Independent scientific-testing rates their products as world-best, with AQUALUMA products rating as high as 20% better in energy efficiency than competing offerings.

AQUALUMA has won multiple awards for innovation and exporting.

They currently export LED lighting solutions for marine, commercial, industrial and high-end domestic applications to more than 50 countries across 5 continents.

Mr Crandon said Aqualuma success had shown how exporting could bring significant benefits to a region, creating jobs and stimulating the local economy.

“It’s pleasing to think that our local Northern Gold Coast businesses contributed to that result,” he said.

“In winning this prestigious award, Aqualuma is flying the flag, both here in Australia and overseas, for all Northern Gold Coast businesses.”